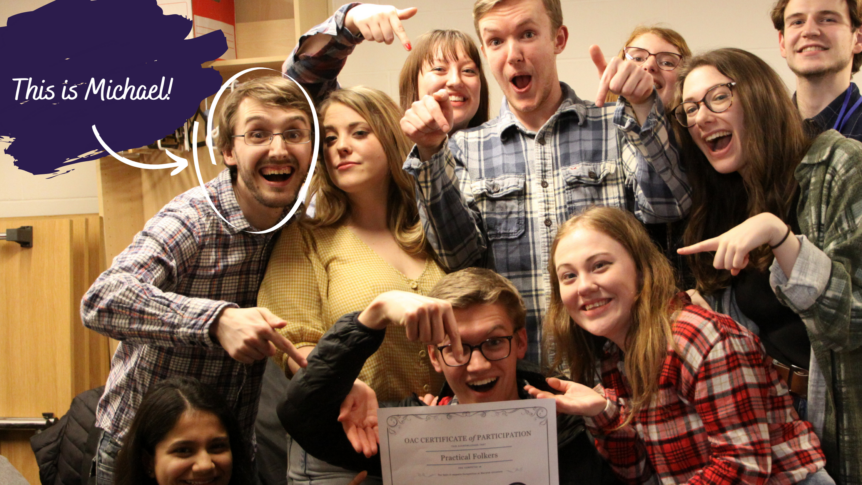 Hi there! I’m Michael and I’m the postgraduate representative of the University of Warwick A Cappella Society (or WACA for short). I am currently a final year PhD student researching with the field of Computational Chemistry. In total I have attended three different universities obtaining three masters degrees in the process, in which a cappella has played a big role in my university experiences, which I honestly couldn’t be more grateful for.

As cliché as it sounds, I’ve always loved to sing ever since I was very little, but for me music in general has always been incredibly special to me. I was diagnosed from an early age as being within the autistic spectrum and I started talking to people at a much later age than most other children. As much as I might have tried to understand what people are like, it was so much easier to engage in singing. You could be in your own little world singing your favourite tune and learn yourself how to sing it as best as you could!

I was very fortunate to have family and friends that fostered that interest all throughout my childhood. I got to perform in lots of school shows and local singing and karaoke competitions which really helped me to become more social. Gradually I could leave my own little world of music and share with others about how great and fun it is. But going away to university was really my first opportunity for me to come out of my shell and become independent.

At the age of 18, I had just begun a master’s degree in mathematics at the University of Exeter. I was not particularly confident making new friends at the time – I was very used to being a part of small friendship groups, so I was overwhelmed to join a university that had thousands of students there. But with lots of students also came lots of societies, one of them being solely dedicated to a cappella.

At the time I only understood a cappella to be barbershop singing – a very old musical pastime where men in colourful stripy waistcoats and fancy skimmer hats. I was proven very quickly at a taster session in freshers’ week that there was so much more to a cappella than that. And not wanting to miss an opportunity to learn more about it, I took a deep breath and signed up to join the all-male a cappella group Semi-Toned, which is possibly one of the best decisions I have ever made in my life.

I felt privileged to be a member of the group for four years. It had brought me so many great experiences, from competing in the Voice Festival UK Competition (which we won in my final year) and the ICCA, to performing in a cappella shows in tours across the east coast of America, to performing each September at the Edinburgh Fringe Festival. But my biggest achievement by far was winning the BBC series “The Choir: Gareth’s Best in Britain” which I still cannot believed happened to this day. I had never anticipated myself even being capable of achieving in any of these things as I’ve never thought of myself to be better than anyone else. But once again I have had incredible friends and family supporting me through everything that we’ve done, including within the group itself whom are still very close to me.

Graduating from the university and leaving this group behind was very difficult for me, but as you can tell, that period has still made for some amazing memories. Once I finished at Exeter, I followed up with a postgraduate course in theoretical physics at the University of Cambridge. It was suggested to me more than once that I should try out for the Choir of King’s College, which looked absolutely amazing, but demanded more time than I was able to give, in a year which I had a lot to prove. I was competing against other students to secure a PhD position there and it meant a lot to me at the time to secure one (which I eventually found wasn’t for me).

Still, I went to a third university, the University of Warwick, where I am now studying for a PhD in a completely different field. I now also had four years at the university secured and time to get back into a cappella which I helped the Leamingtones (at the time the universities only a cappella group) make into a fully-fledged student society. I also took on the role of postgraduate representative, where I regularly get to encourage postgraduate students to join the society.

Since I officially became a member after the society was affiliated, I have had the great privilege of taking part in four different a cappella groups in total. Other than the Leamingtones I have been a member of a four part barbershop group, the Undercuts, as a countertenor and a tenor in the Practical Folkers over the last few years (if you are missing Christmas at all definitely visit the Facebook page of the latter group). I also got to try running my own a cappella group, Gradcapella, for a short time to try and encourage postgraduate students to come and join the society whilst getting to advertise the benefits of being in one.

Then there was the amazing opportunity to be a part of the creation and the running of the Open A Cappella Competition. Although I never had any major roles, I got to tell people about my experiences competing in previous a cappella competitions such that we could plan out the necessary facilities for contestants, in addition to passing over years of contacts to push for the publicity of the event. It was extremely fun to be a part of!

Things have had to be particularly different this year due to the lockdowns, and as such the way we’ve had to interact with music has had to change in the interest in keeping everyone safe. It has also made for a great excuse for me to sing a lot more in my room and at home without receiving noise complaints! I’ve now gotten back into multitracking a cappella pieces for SoundCloud, which I started doing at Exeter, and overall has acted as a way for me to record my interests and emotions over time (if you are interested in giving some of these tracks a listen you can follow the link below).

Although I’ve never worked with the best of equipment, I am always learning something new when it comes to editing and processing tracks. I also used this to raise over £300 for the NHS earlier this year, where I multitracked three challenging pieces of classical music over the course of three weeks, some of which also came with videos as well.

I am hoping to become a university lecturer once I earn my doctorate (hopefully towards the end of 2021) and enter married life, but I don’t anticipate being any less musical regardless of how things will change. However you decide to get involved in a cappella, you will always learn something new, and grow in ways you never thought you could. Additionally, difficult circumstances can present problems, but they cannot stifle your creativity and passion – wherever you are and whenever you have time, there is always something you can do to get involved with a cappella which won’t always be singing.

But what I have loved the most is that I have got to know so many people seemingly from anywhere and everywhere. I couldn’t forget these people even if I tried, and if there is anything that the sporadic flow of life has taught me, I will probably still be in contact with them for years to come!

I hope all of you have had peaceful Christmas and that you have a fantastic New Year! <3 <3

Copyright © 2021 The Open A cappella Community